This is something probably you won’t see anyone talking about, and honestly Kevin Anderson is the last person on earth I would ever accuse of rigging games, he is a very honest player, and what’s good about him is that he plays honestly.

However, the 3rd set between him and Schwartzman (that has just ended several minutes ago) has taken several twists including some unexplained behavior in the betting market as well.

Basically, Anderson, leading 2-0 in the sets, broke Schwartzman in the 3rd set, he was leading 5-4 in that set and was serving for the match – the odds on Schwartzman have reached as high as 21.00 @ Bet365 and he was already a “sure loser” (and Anderson is a “sure winner”)…. now check this out: Don’t get me wrong, Schwartzman can play amazing Tennis, he has amazing shots and he can definitely break Anderson, but if you would check the replay – there were so many calls against Anderson.

Almost all of his serves were 2nd serves, some are very doubtful, one point where he won whilst Schwartzman was leading 6-5 was a point where Schwartzman complained about the ball not being called out – the umpire gave him the point without much of hesitation.

At time of writing, Anderson is leading 2-1 in the 4th Set, all first 3 games in the 4th Set were a break of service. The market in BetFair on this one has skyrocketed in the 3rd Set:

You realize that is over $10,000,000 of matched bets?! Just for comparison Nadal who’s playing at the moment is not even touching the $2 million of matched bets.

I personally don’t mind having drama in the match, it’s actually very good and more entertaining, but pushing the other player on 2nd serve repeatedly is raising too many flags in my opinion.

Whatever it is Schwartzman deserves lots of credit but the officials of this match deserve another investigation into the way this works hand in hand with the betting markets around the world.

A panel of lawyers reviewed Tennis matched and surveyed 3,200 professionals – and among them 464 said they were aware of matches being fixed and rigged.

These matches are mainly low level matches, i.e. where the prize is not big enough, thus the players prefer to get paid indirectly with a larger prize by fixing the match, it’s far easier to intentionally lose a match, and get paid a bribe that is 10 times higher than the prize the no.1 seed would get at a certain tournament.

In South America you could expect to see sometimes a 10.00 underdog winning a 1.05 favorite and it’s not because the underdog played better, but simply because a 10x payout is much more lucrative. Why not place a bet online at several websites, “risk” $5,000 in total and get $50,000 in return – a prize that even the winner wouldn’t get.

And this was in the news, so if 464 out of 3,200 are admitting they are aware, first hand, of match fixing – the ‘underground’ numbers are probably much higher than the media reports to the public.

Rigged matches are not seldom, they are not rare and they are not some one of a kind – they are everywhere, taking place on a day to day basis – from the very low level up to the top level in Sports. It cannot be stopped so long as bookies allow punters to multiply their stakes because in the end of the day the ones pocketing are taking money from genuine bettors who simply want to bet based on stats, intuitions etc. – and those rigged matches are ruining all types of sports and turning it into random outcomes just like a Roulette in the casino.

Tennis matches are easy to be rigged and fixed, that is because it takes only one person to twist the entire “operation”. A player can always claim he/she is injured, not feeling well, make a show and decide if he/she wants to lose the match.

Sometimes it’s not even up to the player itself, linesmen and umpires can also easily twist matches at the most crucial moments of the match (see: Pliskova vs Sakkari – WTA Rome 2018). If you look at the size of bets people place just in websites like BetFair and you would compare it to the top prize offered in a Tennis competition this would be a no brainer.

Take a look at OddsPortal for instance you can see that a current tournament – WTA Nurnberg – top prize is $250,000 – that could be “peanuts money” in comparison to what people stake just at BetFair itself excluding all offshore bookies such as Pinnacle and more! And $250k is the 1st Prize … the other prizes are much smaller – thus giving more incentive to fix and cheat.

So who is Nicolas Kicker?

For some this person might not be familiar, but for some he was an excellent tool to make money. He is an Argentinian player, and as of today World no. 84 in Men’s Tennis (ATP). Now he is accused of doing some shady stuff a few years ago, and what’s bothering me the most about these news is the fact he is accused for fixing matches in 2015.

We are in 2018, 3 years later, and only now the Tennis organizations come up with something like that from 3 years ago?! Now check his results in ATP Madrid 2018: 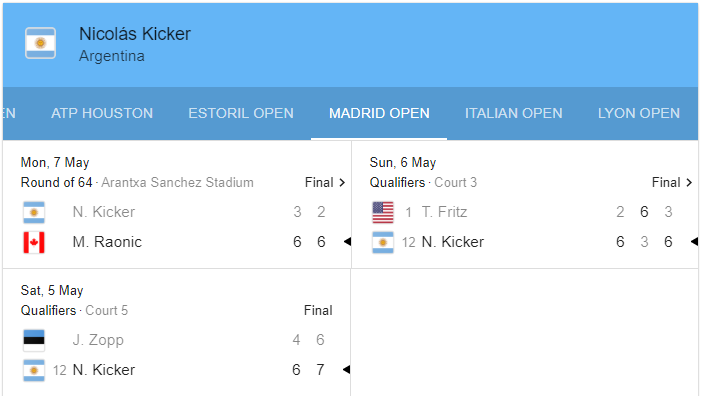 Not bad results, he managed to beat Taylor Fritz in 3 Sets, quite impressive … but check the next 2 tournaments – First – The Italian Open (ATP Rome 2018):

2 important matches against 2 South American players, one from Chile and one from Argentina, both ended in 3 sets, where in both Kicker won the 1st Set and made a “struggle” until the end (what allows more money to be spent on betting as the odds swing in such cases).

So he is blamed for fixing some Tennis matches in 2015, but no word about 2018? How logical is that? It’s like taking a drug addict and accusing him of being an addict 10 years ago – why don’t you forget about that and focus on what you have in your hands right now?

Besides – any player can fix a match, whenever he or she feels like it… it could even be Nadal, Thiem, Djokovic or Zverev – the power of bribe is just too strong, and today with the ability to transfer Bitcoin anonymously it’s not too hard to push a player to do something, even during the middle of the match – it only takes a few words from the coach to tell the player what he or she needs to do and the player, the coach, and many people around will pocket lots of money.

So let’s conclude with what Sean Bean said in the movie Ca$h (2010) – “when it comes to cash nobody can be trusted“.

Imagine 5-5 in the 3rd Set, 40-40 (Deuce), Pliskova is serving and winning the point but the umpire is giving away the point to Sakkari for no reason whatsoever. Watch it here from 05:32 in the video:

The lines-person who calls this ball out moves her hand to her left after 2 seconds after the ball landed on court … (05:44 – 05:46 in the video), the Umpire is relying on that call and thus giving the point unjustifiably to Sakkari.

Sakkari won the following point after Pliskova got furious and lost her concentration, and once she led 6-5 she had 40-15, then Match Point and she won the match. Pliskova got so upset that she smacked her racket on the umpire chair and was even fined for it. Watch it here from 01:40

Now ask yourself the following questions:

Clearly the WTA wanted Pliskova to lose the match, why? who knows what their motives where, but this is an absurd – and fining Pliskova for smashing her racket is like punishing the innocent and putting him in jail on top of it … you robbed her effort here, so leave her alone … but nooo, why not fine her as well for smashing her racket? It’s okay to be upset, especially in a situation like this, no fine should have been imposed here whatsoever … in fact the one who should pay a fine is either the umpire or Sakkari for cheating and not admitting the ball was in – but the Sports today is not what it used to be and we all know that.

This 6 minute video shows what happened on the 7th Game of the 3rd Set, during the match between Aga Radwanska and Mona Barthel:

This is not just one single error but the umpire was repeatedly “crediting” Barthel with points… this could be a honest error and to the umpire’s merit in this incident she did reverse the decision and Radwanska won the point and the game… you could only wonder what happened to those who placed bets on Barthel to win the game (this specific 7th game, not the match itself, in Tennis a game is one single digit in the scoreboard). Perhaps the bookies just decided to void the bet, or accept it if was on Barthel and then mark it as a loser – it’s hard to tell, but what’s for sure the bookies will never lose from a situation like this.

As for why this happened – this could honestly be a human made error but it could also be something else, you should never try to understand the logic behind something that is completely illogical.